The cultures and histories of India and the western world have intertwined for thousands of years - from key discoveries made by Indian mathematicians in the area of algebra, to ship building methods brought to India by the Romans,  to the spice trade, we have influenced and helped each other for millennia.

Today India  is a land of contrast; from booming, ultra modern cities with a growing IT industry, to small villages that still lack basics such as clean drinking water and adequate sewage. It is a country with a thriving movie industry that releases more movies each year than Hollywood, yet still struggles to feed its people.

India is a country with more than a billion people. Approximately 40% of the population lives on less than the international poverty threshold of $1.25 a day. With approximately  25,000,000 orphaned children, it has more orphans than any other country in the world.

While India has made tremendous progress in the past few decades there remains much work to be done. 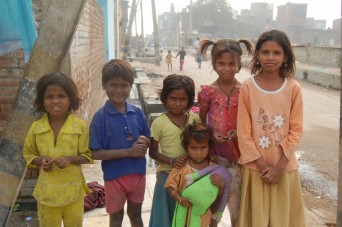 The power of your dollar:
In many parts of India one can educate a child for $15 a month or hire a teacher for $200 a month. A small orphanage can be operated at a cost of $2,000 a month. A mere  $3 dollars a month will provide health insurance for a child.

The goal of this small charity, Hope Abides, is to offer dignity and hope to the most vulnerable in India.  We believe that with a relatively small amount of money, we can renew and transform the lives of India’s children.