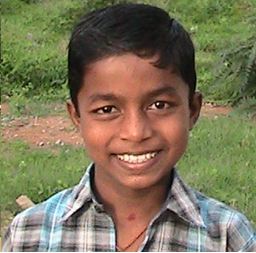 Ganesh (grade 3) and his brother Arun  come from Raavela village, Guntur. They lost their mother in 2004 and soon after their father became mentally disturbed and left the village. His whereabouts are still unknown.

Arun ranks among the top 10 in their class scoring around 75% while Ganesh scored 69%.

Ganesh is a good dancer and Arun is good at painting.